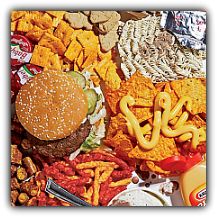 If you’ve had gout for any length of time, the term, high uric acid foods has no doubt come up. But the term itself is sort of misleading – foods don’t really have uric acid in them – it’s more like, “foods that cause high levels of uric acid”.

This is where the real debate begins. The Old Guard is still sticking to the idea that the high uric acid foods like red meat and alcohol are the cause of gout – calling it the “Disease of Kings” – like it’s some sort of sign of affluence. How do they explain that it’s almost at epidemic proportions around the world? Striking in every segment of society? Isn’t it suspicious that gout is on the rise, on par with obesity, diabetes, heart disease, cancer, and stroke?

Ok…let’s give ‘em the benefit of the doubt and say, “ya know, maybe those two double scotches right before that 16oz slab of Prime Rib, all washed down with those three Stella Artois’, did fire up your gout”…maybe it did. Of course, that wasn’t the first time…this week, this month, this year…that you’ve had that meal either. But who eats like that? Even if you do have the money? There certainly are a few reckless individuals out there who could drink like that and eat high uric acid foods like that for a while, but it just doesn’t make any common sense no matter how you look at it.

So What Is Causing the Gout Epidemic?

Let’s look at it from a different perspective. As a society, what do most people eat? Most of us eat out at restaurants a large percentage of the time. Of all the foods we buy at the grocery store, how many come in a box, bag, can, or bottle. Even the foods that come in the back door of the restaurants are all packaged up in some sort of box, bag, can, or bottle. Are you starting to see a thread here? It changes the current thinking about what foods high in uric acid really are.

When it comes to gout, the worn out dogma of days gone by is to go on a “low purine diet”…which is not a bad idea. You know why? BECAUSE IT MAKES YOU GO TO THE GROCERY STORE, BUY REAL FOOD, AND MAKE IT YOURSELF!

They are already cookbooks out there for gout and a quick Google Search will bring a flood of them.

You see a lot about “gluten-free” foods these days – even gluten-free restaurants or at least gluten-free menus or items at restaurants. Is the day coming that we’re going have “purine-free” menus, items, restaurants? HELL NO! It’s not that big of a problem! Then why all the gout?

…too much refined, modified, and processed dead food – those are high uric acid foods. Have you noticed that foods that comes in a box, bag, can, or a bottle are usually sort of “dead”? If there’s any water/moisture at all, it’s full of all sorts of chemicals and preservatives. Real food is “live” food. Is the day coming that we all have community gardens, and community animals for milk, eggs and meat? Or is that just too damn inconvenient?

Ok, I’ve ranted on about the evils of our food  supply long enough for one morning – let’s come to the point: there’s one thing that’s probably going to be the death of us all and it’s high on the list for its role in gout and health crimes in general – High Fructose Corn Syrup or HFCS.

Got Gout in the Knee?