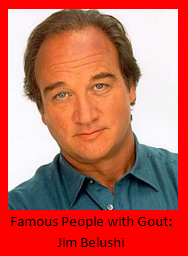 Jim Belushi is one of those famous people with gout out there bringing much needed attention to this painful problem. There are so many people with gout who try to ignore it or live in denial about it. This is not the best way to overcome this excruciating omen of worse things to come.

Dr. Manny of Fox News is trying to understand what gout is. He did an interview with Mr. Belushi and the video of it can be seen on the Fox News blog post. Because there are 8.3 million people with gout in the US alone, having a celebrity like Jim Belushi go public with it is a big deal.

Because most people with gout try to fool themselves into thinking that it’s never going to happen again, I want to applaud Mr. Belushi for adding his star power to the public awareness of gout.

But . . . there were some inconsistencies in the interview that I feel responsible to clarify for the benefit of my readers. The following is a sort of “blow-by-blow” of Dr. Manny’s interview with him, and my added comments.

Early in the interview, Jim Belushi tells us that he first got gout 12 to 15 years ago, which in my opinion gives him credibility. Having gout for so many years makes me think that he really does know gout pain . . . that makes him one of us! He further goes on to say that every time he got a gout attack, he thought he’d stubbed his toe or sprained it or something…this is confirmation!  People with gout ALWAYS think they injured themselves somehow. No one can comprehend that kind of pain can come from anything else.

Mr. Belushi (let’s call him “Jim” shall we?) seals it by mentioning that if you just breathe on the big toe under attack, the pain could send you through the roof. Only a gout guy knows this. He mentioned that he went to see a rheumatologist and found his uric acid to be at 8.9 mg/dl…which personally, I found to be sort of low. I had mine up to 9.9 when I was in the thick of it!

From that point on in the interview, I feel like Jim sort of does a bit of a disservice to people struggling with gout.

He does a poor job of explaining uric acid and how it crystallizes and causes gout pain. But the article itself comes to the rescue and clarifies it nicely…I paraphrase it as follows:

‘Gout is in part, caused by the metabolism of purines, which are in virtually every food source to varying degrees. Uric acid is produced as the by-product of this process. In lesser amounts, uric acid is a healthy antioxidant, but in excess creates the problem of gout.’

In my opinion, this is the information people with gout really need to know!

At this point in the video, Jim (were old buddies now) talked about how he got started on allopurinol…s l o w l y. This is wise, because when you first start allopurinol it causes more gout attacks. Believe me, this is true. But this is the way you really need to look at it – drugs are like credit cards; sooner or later you gotta pay.

At this point Dr. Manny and Jim start to talk about how he was advised to “change a couple of things”. This of course meant diet changes.

Then, he goes on to say “but not at Christmas!”  Then the two of them attempt beat the same old dead horse about “red wine, red meat, and organ meats”…which only have minor relevance in the big picture of gout. This part of the conversation about gout is basically vague and confusing.

Jim Belushi is a star…Chicago-born with a degree in theater. He’s worked hard. The death of his self-destructive brother was surely not easy on him. The movie industry is a crazy place: sex, drugs, and rock & roll.

From all that stress, I’m not surprised Jim showed up with gout…and if Savient Phamaceuticals was my company, I’d hire him too! According to Wikipedia, Jim and Savient have teamed up to market Savient’s gout drug called Krystexxa. In other words, it appears that Jim is not doing all of this gout-awareness promotion from the goodness of his big old Mad Magazine heart.

Interestingly, Jim also talks a lot about his use of the gout drug Allopurinol, which is the most well known and well tolerated drug for gout. However, Krystexxa is not. Krystexxa had some very serious problems in the clinical trial phase of the FDA approval process. So, could it be that Jim is trying to make it sounds like Krystexxa is just as acceptable as Allopurinol? Maybe its just me . . . but I smell something fishy here.

What People with Gout Need to Know

I want to make sure that everyone with gout is clear about the role drugs play in the war on gout. They are a resource…a resource to be taken advantage of…but not abused.

All too often, drugs are rationalized by “genetics”. Most people with gout – whether your dad had it or not – have it because of poor lifestyle choices.With diligence and some commonsense, gout can be easily managed without drugs.

The worse thing about gout drugs is that they enable a person with gout to continue on with the same destructive habits and tendencies that created gout in the first place. Sadly, later in the interview, Jim makes a statement that if you just take these drugs, you can do whatever you want! (Jim, we need to talk!)

I’ve made it my mission to SQUASH this kind of misinformation!

The whole process has helped me. Not only that putting into practice with correct water and hydration, the regular addition of Apple cider vin, and meal planning has dropped weight and created a better lifestyle. I still have some knee pain but most swelling has gone down and it gets a bit better everyday.

The rest of the video sort of wanders around without much direction and Jim and Dr. Manny (is he really a doctor? LOL!) attempt to bestow some holiday season  tips for people with gout:

Jim and Dr. Manny finish up with more BS that basically continues to promote the myth that gout is some kind of food allergy or hereditary condition, that we have no control over…which I’m sure is what Jim’s boss (Savient Pharmaceuticals) wants him to promote.

It’s at this point that Jim commits his biggest crime:  He states that if you want to watch what you eat then you don’t have to take the drugs…but if you don’t want to watch what you eat then all you have to do is take the drugs! Dude! Love ya man, but you need some education! For people with gout, that is not the way to help them!  And I speak from experience…for 13 years I took plenty of gout drugs and my gout just continued to get worse and worse till I got a handle on my contributing lifestyle choices.  I talk more about those choices in my book Kill Your Gout Now!

To set the record straight:

Lastly, they talk about RCG, Refractory Chronic Gout, which is the newly “invented” terminology to describe tophaceous gout, and was designed to scare the hell out of people with gout. I’m sure you’ll be hearing more about this because if you read between the lines, Jim Bob is saying that there is now a new drug that makes tophi go away.  Could it be this new one that Savient makes?

Before we wrap up, let me state that Tophi actually is something to be very concerned about. Tophi are deposits of urate crystals that are ugly as hell and they grow out of control. I know because I had three separate surgeries for it on the fingers of both hands and one of toes on my right foot.

If you think a gout attack hurts, just wait till you encounter the pain of getting Tophi scraped out of your fingers and toes.  Do NOT go there!

☆ Remember!  Gout drugs are like credit cards; sooner or later you gotta pay.

What To Do About Gout