“Where Did This Come From?” 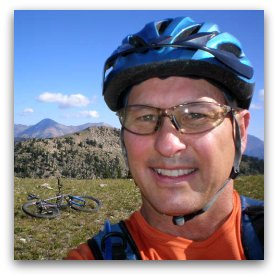 This is how my gout story sounded from inside my head:

“Did I twist my ankle at work? …I must have. I don’t remember doing it but why else would this hurt so bad? It’ll be better tomorrow.”

Then the pain woke me up and kept me up. Then my right ankle swelled even more and then it got really red and hot and unbearably painful.

If I’d had a gun, I would’ve shot myself. I was out of town and the ride home was hell. A half a bottle of ibuprofen and a massive amount of ice later, I landed in the emergency room.

I’m 54 and I’ve been very active and athletic all my life. Skiing and mountain biking is an everyday thing here in Colorado…gout doesn’t fit in very well.

There are a bunch of different reasons for how my gout story ended up, and maybe they’re some of the same reasons you’re “enjoying” the “gout experience” too. From both sides of my family, my grandfathers had gout (although I don’t put too much stock in all the hereditary crap about gout). Way back then, there was of course some drinking going on, but I also wonder if how much beans and rice they ate had anything to do with it.

Something else that may have had something to do with it could have been how much good clean water they had and how much really good food they got to eat and how often – and it’s important to note, it was back around the Depression.

The Other Part of My Gout Story…

Another part of my gout story that can’t be overlooked how active and athletic I’ve always been. Maybe it was injuries and over-exertion in my younger years that helped bring on the curse but I think it has more to do with the habits I formed along the way.

Skiing, biking, hiking, swimming, running, jumping and who knows what all, everyday, all day long, not drinking enough water, forgetting to eat and what I did eat was probably not always real good for me. Day in and day out. These were the habits I formed. Sound familiar?

Then I was out on my own. My parents had done the best they could. I was out there on the loose…with all of those habits. Only now there was alcohol and parties and staying up all night, running myself ragged.

Soon it was “ski all day”, work in the restaurants at night, and construction work in the summers. And more bad habits. Lots of rich food and wine at night and beer drinking in-between. No breakfast, no lunch, huge dinners and alcohol. Get the picture?

It is pretty much like turning on the taps yup. Put it this way sneakin’ a fart around the boys could be catastrophic to my wranglers. I will taper off the ass grinders. On the ibuporfen and gonna soak the hoof in a bit. Thanks a million man…you have no idea how nice it is to get the real story from a guy that knows…24 hours ago the thought of puttin my cowboy boots on made me contemplate a quick painless swing of the dull axe out back…today I slipped it on….still some pain but I got er on…die gout die. I will keep ya in the loop…Thanks a mill again…

A Quick Note on Construction Work

Most construction workers rarely pay attention to the warnings on the labels of paints, glues, sealers, etc. Those things are brain damaging toxins! Just think what a few years (or a lifetime) of that kind of work can do for you…

That Pretty Well Set the Stage

In the beginning the gout attacks didn’t happen that often and I was able to knock them down with Ibuprofen. But when I turned 40 and got my first yearly physical, (an annual ritual now), we discovered that I had several problems: an under-active thyroid, a poorly functioning liver, only ONE kidney (we suspect Aliens got it) and…gout.

Interesting huh? All those other things and gout. Is there a connection? My doctor set out to get me back on track with several medications, among them were Alopurinol and Colchicine for the gout.

How Does My Story Compare to Yours So Far?

The next few years went fairly well but I had a big concern about the prescription drugs and their long term affects. I was also trying out some different diets without really knowing what I was doing. Remember the Atkins Diet? High protein and low carbohydrates. My doctor had warned me off of eating a lot of beef and shellfish but since I had worked in a lot of nice restaurants, I was in the habit of eating really well.

So an inconsistent diet of high proteins, no medication, lots of cherry juice and a very active social life (Iwas in sales for a long time, entertaining clients all the time), mysteriously these “lumps” appeared on my toes and fingers. Tophi. Are you scared yet? A few surgeries later I was back on the medications and off to the nutritionist.

With all this new wisdom I’d gained from my surgeries, I was now moving in the direction of becoming a vegetarian. Lots of steamed veggies, rice and…beans. Beans or Legumes. Like Edamame. Soy beans. Huge protein – HUGER purines! I was still having lots of gout attacks and I couldn’t figure out why.

At the direction of the clinical nutritionist I got several hundred dollars worth of blood tests done, urine analysis, and a 14 page questionnaire, all of which he ran through a state of the art piece of software that told us what foods were:

There was very little that I could actually eat according to this program but it was like a whole new career trying to stick with it…and any kind of beans were off limits.

But that was not the most enlightening part of the whole exercise. The program also told me what quantities of food I should eat and also how often. Then it struck me and it was soon confirmed by my rheumatologist: it’s not only what you eat, but how much and how often. And that brings us back to . . . habits.

“What is gout?” became painfully obvious: my lifestyle was a mess and until I got it under control, I’d probably never get past the misery and fear of these severe gout attacks. What did I do? I started changing my habits. And you know what they say about habits? They die hard and mine are no different. The good thing is, I’ve made excellent headway on changing my habits.

Maybe your gout story and my gout story have a lot in common or maybe they don’t, but the one thing I’m pretty sure of, you want to steer clear of that intense pain you and I both know so well.

This Is What I Wanted You to Know About

My biggest break-through came when I accidentally learned about free radicals and how antioxidants prevent and repair them. There is a lot more more to it but it has everything to do with eliminating gout…your gout.

☆ Remember!  When it comes to gout, there’s always some drama.