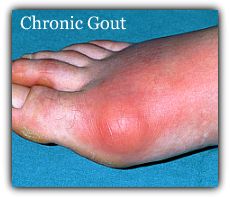 “Chronic Gout” is the stage of gout when you finally realize that this painful recurring condition will not be ignored. For many people, it only takes a few years to develop chronic gout.

After the first acute gout attack, it is only a matter of time before others follow. Usually it is within a year. All it takes is getting several attacks in relatively rapid succession, and the fear of the next impending gout attack becomes a driving force. The memory of the pain associated with chronic gout is very compelling.

Because the pain of gouty arthritis is caused by the crystallization of uric acid in the joints, it is valuable to keep watch over how much is present in the bloodstream. Gout becomes chronic when the uric acid is not monitored and becomes overly abundant.

While in the early stages of gout, called hyperuricemia, high levels of uric acid can be present in the blood without showing any outward signs or symptoms. However, after the initial diagnosis of gout has been confirmed, monitoring uric acid levels is wise.

If consistent testing of blood uric acid confirms that the levels are above normal and gout attacks are occurring with regularity, this is when the condition is called chronic gout.

The pain of a gout attack is excruciating, as anyone who has experienced gout will tell you. When uric acid levels are left untreated and/or unattended, gouty arthritis can become much more dangerous and much more of a problem than just the agonizing pain.

As with any type of joint injury, if the same joint is damaged repeatedly, the destruction can permanently destroy bone, cartilage, tendons, and ligaments. This is the case with chronic gout. Many people have flares that attack the same big toe joint every time it occurs.

Gout is due to an overly-acidic inner body condition. This happens because the kidneys are not able to properly balance the body chemistry as well as they once were.

As uric acid becomes more prevalent in the system, it can also crystallize in the urinary tract and cause kidney stones. The urate crystals are the same material that Tophi are made of, as in the case of chronic tophaceous gout. The renal complications that these uric acid kidney stones create can be potentially fatal.

Diabetes and heart disease follow closely in the footsteps of obesity. These illnesses have become wide-spread and commonplace enough to be defined as chronic. Gout is often found in individuals who suffer from these afflictions as well. When gout is chronic, it is a painful omen that these equally serious health conditions are sure to follow.

Hi Bert,
Your kill it now worked about 80%.  As I said, I had it in both ankles but at least I’m walking now.  I used the lemons instead of ACV because 18 years ago I was told to take ACV too make me feel better.  I took it for 2 days and experienced my first bout of gout, and have been getting it ever since. Prior to that I always had a lemon first thing in the morning with warm water.  After my gout attacks, I stopped having the lemon…big mistake.  This morning I took a glass of baking soda, and then 1 hr later I had my lemon, that helped.  Also taking cherry concentrate, plus only eating veggies.  At the moment I’m about 90% fixed, hope you can help me more looking forward to hearing from you.

THANKS A HEAP ~ MORENO.

As explained earlier regarding kidney stones caused by urate crystals in the urinary tract, these same crystals can form in and around the joints of the fingers, knees, toes, elbows, and other sites on the body.

While generally painless, the lumps or nodules grow quietly until their unsightly appearance becomes embarrassing or inconvenient. They can look chalky under the skin, or sometimes even look like curds of cottage cheese.

The real danger comes if they are to erupt, or become abscessed. In this case, severe infections can become quite a serious health risk.

While gout in general is due to poor lifestyle habits and choices, when chronic gout is raging out of control, medical intervention is often needed in addition to behavioral changes.

Gout flourishes in an overly-acidic body condition. The first order of business is to observe, identify, evaluate, and prepare alternatives to the lifestyle patterns that have produced the condition of gout in the first place and allowed it to become chronic.

In addition, medical treatments by a qualified naturopathic or medical doctor should be implemented immediately.