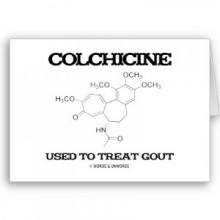 Check out this news article I found about a gout drug that has caused 3 deaths – you’re going to freak because that gout drug is Colchicine! But before you get to crazy about it, it was an unusual case. As far as a gout drug goes, for centuries. Nevertheless, it is a poison and it does have to be used properly.

Here’s the gout drug article from the CourtHouseNews.com:

Two lots of misbranded injectable colchicine “led to the deaths of three people in the Pacific Northwest,” the Justice Department said in a statement. Colchicine is used to prevent gout attacks in adults and to relieve the pain of gout attacks when they occur.

ApothéCure and Osborn are accused of violating the Federal Food, Drug and Cosmetic Act. ApothéCure shipped 72 vials of compounded colchicine to a now-defunct medical center in Portland, Ore., in February 2007, prosecutors said.

Within a month, three patients in Washington and Oregon who were given the drug died of organ failure and colchincine toxicity.

“FDA testing of vials selected from the lethal shipment revealed that some of the vials were super-potent, containing 640 percent of the level of colchicine declared on the label,” prosecutors said in the statement. “Other vials were determined to be sub-potent, and contained less than 62 percent of the declared levels on the labels.”

Fear of a Gout Drug?

I’m not trying to be an alarmist here but I do feel some sort of responsibility to pass this kind of stuff on. As a gout drug, I took a low dose of Colchicine for years until I got this whole gout thing figured out, but even back in those days, the drugs were not completely solving the problem . . . which is why I had to become The Gout Killer!

The “remedy” of BS and ACV worked immediately as you said it would. A steady diet of banana-blueberry smoothies, green tea and celery on Day 2 has kept the swelling down. Not sure what caused the flare up as we eat a lot of fresh fruit and vegetables, lean beef, chicken and fish, and moderate alcohol use. Your theory of too much acid, possibly caused by stress, makes sense. Will try lemon-infused water to make my body more alkaline – plus continue the bananas, celery and cherries. Other ideas welcome. The drugs the doctor prescribed were making me sick, so your remedy (other than the ACV ? was a welcome relief.

Anyway, we all have to be wise about using all the resources available to us and some of that falls into the category of gout drugs. When health challenges get to extremes, extreme measures sometimes have to be taken – BUT – don’t make that the first resort – it should be the last resort! Be smart, maintain your health as naturally as you can and if you have to take drugs, make it a goal to discontinue them as soon as possible!

☆ A gout drug shouldn’t kill you.

Where Do Gout Home Remedies Fit Into Your World?