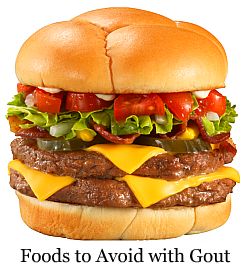 The foods to avoid with gout are really all the “edible food-like substances” found in every fast food restaurant and packaged up in every grocery store. The reason you’re getting one miserable gout attack after another is probably NOT because you can’t stay away from the froi gras and the port…as every other website about gout diets would like you to believe.

The Dogma About Foods to Avoid With Gout

“Gout is a painful form of arthritis caused by the buildup of uric acid in the joints. Excessive uric acid typically comes from eating purine-rich foods like organ meats and from over-indulgence in alcohol.”

How many times have you heard that?! If I hear it one more time I’m gonna puke!

There is an element of truth to it but since the incidence of gout has DOUBLED in the last two decades, I bet for the most part, it isn’t because of drinking too much scotch and eating too much liver and onions! More like, too many cheap burgers, greasy fries, 40oz cokes and WAY too many Bud Lites!

It IS important to know which of these purine-rich foods to avoid with gout, BUT I can guarantee, if you went and bought these foods from high quality sources, ate them sparingly and infrequently, your health would FLOURISH! Here they are: 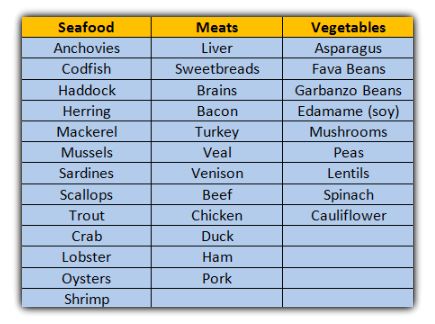 (I eat this stuff all the time!)

The REAL Foods to Avoid with Gout

The foods you really need to avoid when it comes to the war on gout are fast foods and processed foods. This is for a number of reasons, these are the most obvious:

Before we go any further, let’s lay to rest one of the biggest misconceptions and scams of our modern times; “all fats are bad for you”. This is BS and you can take it from Dr. Mercola where he tells you in his post titled, “The Forbidden Food You Should Never Stop Eating”.

Our bodies are made of proteins, carbohydrates and yes, FATS. There are a number of very healthy fats and fatty acids our bodies need to stay strong, healthy, and gout-free.

Here’s the list of gout-causing fast foods from fast food restaurants and processed foods from the grocery store that you need to avoid for gout – carbonated sugary sodas should be at the top of the list but we’ll get to those and alcohol in a minute: 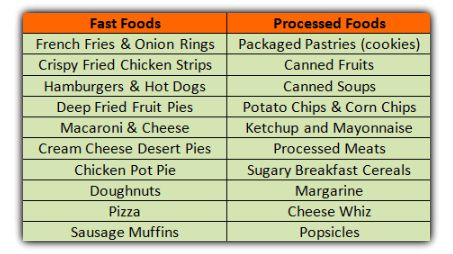 Continuing on, other foods to avoid with gout that go without saying are candy bars and candy of any type. Generally speaking, anything that comes in a box, bag, can, or a bottle is suspect and doesn’t fit into a good gout diet.

The toxic chemicals that go into producing, processing, and packaging are not recognized by the body as food – they are therefore considered foreign invaders that the body wages war on to expel. This causes massive toxicity and acidity, and it compromises the function of the kidneys and liver and is the underlying cause of gout.

Studies have now shown that one of the most potent ways to raise uric acid levels in the bloodstream is by consuming large quantities of fructose – as in High Fructose Corn Syrup. The biggest offender is carbonated soft drinks like Coca-Cola, Pepsi, Mountain Dew and others.

However the real danger comes from being misled by seemingly healthy fruit drinks and sports drinks. Additionally, HFCS is found in canned soups, baked goods, condiments, and canned and frozen fruits and much more.

What you are doing means so much to me. I have difficulty expressing, in words, how much I feel your thoughts and efforts change the world. We are gout fighting warriors!!

Personally, I really don’t understand why this one gets so much attention. For all the same reasons that too much alcohol gives you a hangover, it’s obvious that it weakens your health and makes you prey for gout.

Of all types of alcohol however, beer is the worst. To varying degrees, it contains purines. So if eating a bunch of purines is bad, go on a real bender and slam six or eight beers and see what that does for you.

☆ Remember! As far as which foods to avoid with gout goes, fast foods and processed foods are just as bad, if not worse than high purine foods.