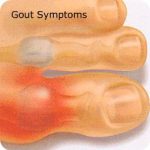 The symptoms below mean you are probably NOT having a gout attack:

It is pretty much like turning on the taps yup. Put it this way sneakin a fart around the boys could be catastrophic to my wranglers. I will taper off the ass grinders. On the ibuporfen and gonna soak the hoof in a bit.

I will keep ya in the loop…

Thanks a mill again…

Where Can Gout Symptoms Show Up?

To thoroughly answer the question, what is gout and what the associated symptoms are all about, the first thing to understand is that gout can show up in any joint of the body.  However, the symptoms of gout usually appear in the “extremities”…the joints that are farthest away from the heart, like the fingers and toes, hands and feet.  This is because the hands and feet have a lower body temperature than your body center, and uric acid will crystallize more readily at lower temperatures.  Also, there is less blood circulation in these “extremity” joints, so the uric acid crystals tend to “pool” there and not come back out.

For men, the most popular place to get gout symptoms is in the toes, feet and ankles.  For gout in women the most common location is in the fingers, hands and wrists.

The Second Half Of A Gout Attack

The first part of a gout attack is when the uric acid crystallizes and lodges itself into one or more of your joints.  These crystals are very sharp, like needles, and will actually poke holes in the surrounding joint tissues such as cartilage and tendons.  Once these uric acid crystals have actually DAMAGED the surrounding joint tissues, then the second half of the gout attack begins.

The 2nd half of a gout attack is when your body recognizes that it has been “injured” (in this case by the sharp uric acid crystals) and “calls in the troops”…it mounts an inflammatory response.  The tissues in and around the affected joint become inflamed, and it’s this inflammation that causes the excruciating pain of gout.

The classic gout symptoms listed above are in fact inflammation symptoms.  Right?  Think about it . . . if you accidentally stepped off a curb wrong and twist your ankle badly, your ankle would swell up, get red and hot, and become stiff enough that you had to stay off it.  Right?

Gout symptoms are the same, but the injury came from the inside…from your body’s own internal “chemistry” being out of balance.  The balance that has been lost is your overall body pH balance, or acid/alkaline balance…NOT just your uric acid level.  Don’t be fooled by this common gout myth.

How To Get Rid Of The Pain

If you seek relief from a medical doctor, most certainly he or she will give you some powerful pharmaceuticals to knock out the inflammation.  These drugs work well for some people, but do not work at all for other people…yet they do have serious side effects for everyone.

After years of duking it out and beating my head against the wall trying to understand “what IS gout?!”, I finally discovered some natural ways to get rid of painful gout symptoms that are just as effective as the pharmaceuticals, or better, without the dangerous side effects.  Click here to learn more about natural ways to get rid of gout symptoms.

Treating Gout Symptoms vs The Root Cause of Gout

Also, keep in mind there is a vast difference between treating the symptoms (inflammation) and treating the root cause of gout.  Yes, top priority is to knock out the symptoms asap, especially to avoid any permanent joint damage.

But unless you want to keep having one gout attack after another, it is NOT ENOUGH to only knock out the gout symptoms…you have to go after the root causes of gout.  And most medical doctors have no idea how to do this.

Beware:  Most doctors have tunnel vision and think the root cause of gout is uric acid. They will give you a prescription for allupurinol or febuxostat, and tell you to take this drug every day for the rest of your life.  These 2 drugs are “Xanthine Oxidase Inhibitors”, which means they work to reduce the amount of uric acid your body produces internally.

However, studies have shown that 90% of gout is NOT caused by over-production of uric acid, but instead by inadequate “elimination of uric acid” via the kidneys.  So, why don’t docs give you drugs to help with that?  There aren’t any that work very well!  So, instead they give you a prescription for a drug that does not do what you need it to do.  I don’t know about you, but this seems like insanity to me.

I took the all typical western medicine gout pharmaceuticals for 13 years, but my gout just kept getting worse and worse.  It was ruining my life.  I finally got fed up and said “there must be a better way”.  And I embarked on a mission, to find the most effective way to get rid of gout symptoms once and for all.  Through endless trial and error, leaving no stone unturned, I stumbled across a natural way to eliminate the symptoms as well as the root cause of gout, and now it’s been many years since my last gout attack.  Hallelujah!

But then I realized there are lots of fellow gout sufferers who would never hear about what I discovered…if I didn’t tell them.  That was the beginning of this website, and my handle as The Gout Killer.  I took everything I learned THAT WORKED to get rid of my gout symptoms and root causes and wrote a short book about it called Kill Your Gout NOW!

And in this book I give a simple “formula” for how to knock out gout pain in 2-4 hours using common grocery items.  This book has helped countless people to quickly get rid of their gout symptoms, and you can hear what some of them have to say about my book by clicking here.