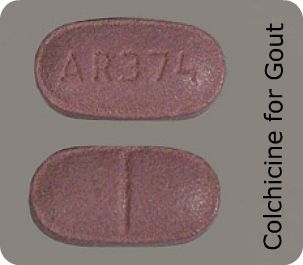 Colchicine for gout has been used to treat acute attacks for many years. Colchicine is derived from a plant called Autumn Crocus, and as early as 3,500 years ago the healing effects of Autumn Crocus on pain and swelling were written about in Egyptian medical scrolls. Numerous references have been made throughout history about the use of this plants extracts in the treatment of gout and other inflammatory conditions. These writings also attest to the immense suffering gout has inflicted on people all over the world throughout history.

The use of colchicine for gout was not approved by the FDA, but in combination with probenecid it was approved for treatment of hyperuricemia, or high blood levels of uric acid. In 2009, the FDA awarded a major drug company exclusive marketing for three years and an indication for the monotherapy in gout and two other conditions. One of the conditions of this “FDA deal” was the company’s agreement to spend 100 million dollars in research via 17 designated studies into the drug . . . and 45 million of those dollars went to the FDA as the application fee!  Consequently, in 2010 the FDA pulled all existing stock of the old colchicine off shelves. The price of a colchicine tablet increased from about $0.09 to more than $4.50 a dose.  Do you smell a rotten fish?  I do.

In order to understand how colchicine for gout works, we must first understand the inflammatory response to uric acid crystals in joint spaces. An inflammatory reaction is the body’s first response to injury or infection. Called “innate immunity” it is a general reaction the body makes to anything it considers “foreign.” This can be many things such as venom from a bee sting, a bacteria growing where it shouldn’t or blood in the wrong place.

On every normal cell within the body there are proteins on the cell surface that let the body’s defenses know that the cell is “self.” Certain white blood cells float around just looking for cells without this protein marker, which they then identify as “foreign.” When they find such foreign cells, they are able to call in many other white blood cells to respond. They also stimulate the body to crank up production of the first line of defense to “neutralize” the “foreign” cells.

The classic inflammatory response creates typical symptoms, no matter where in the body or to what the response is started. Known since ancient times, the inflammatory reaction is still identified by Latin names. These four findings are:

Think about the immediate reaction of the skin to a bee sting. The area around the sting becomes red, swollen, tender and hot. These are the inflammatory changes caused by the initial innate immune response. The same thing happens in a joint when the joint capsule and joint surfaces are injured by uric acid crystals.

Uric acid crystals injure the joint capsule lining and red blood cells are released starting the inflammatory reaction. As the joint becomes swollen (tumor), and red (rubor), and painful (dolar) and hot (calor) it puts stress on the cartilage lining that makes up the joint space, which then becomes injured. The inflammatory reaction is then initiated to the cartilage of the joint itself as well as the fluid filled capsule. Then you have a full-fledged acute gout attack. White blood cells flood the area in an attempt to “neutralize” the identified “foreign” proteins.

Colchicine for gout does nothing for the condition itself. It works on stopping the body from making the white blood cells that are the body’s response to the gout. By decreasing the production of the white blood cells, it limits the inflammatory response and subsequently decreases the pain, swelling, redness and heat.

In order to make new cells of any kind (except reproductive cells) in the body, the process of splitting one cell into two requires duplicating the genetic material (DNA). During cell division, the dividing cell makes a structure called microtubules that attach to the DNA and pull half into one cell and half into the other. After the separation is complete, these microtubules disintegrate and the molecules left are recycled for the next cell division.

In addition to that, colchicine has been shown to have a “uricosuric effect”, which means it increases elimination of uric acid via urine. This is not how the drug helps an acute attack, but it may explain its recent approval as a preventative gout medicine. There are other agents available that promote uric acid excretion without interfering with the genetic process of cell reproduction.  Those would be better choices!

Side Effects of Colchicine

One of the major problems with the use of colchicine for gout is that it has what is called a narrowed therapeutic index. This means that the amount of colchicine required to provide relief is very close to the toxic dose. The major side effect is gastrointestinal distress, more specifically diarrhea. Often the recommended usage instructions will say “take every two hours until pain is improved or diarrhea starts.” More often than not the diarrhea wins! Additional common complaints are abdominal pain, nausea and vomiting.

Other less common side effects can include bleeding in the stool or urine, headache, hives, numbness in the hands or feet, pain, fatigue, weakness, or sores in the mouth.

Other Indications for Colchicine

Along with the approval of colchicine for gout, it has also been approved for the treatment of:

Sorry to be traveling non-stop since I first downloaded your remedy for gout. Managed to complete the course before departure and left the state for a bit over two weeks. I also went off my meds for blood pressure and for cholesterol and left my rather elaborate multi-vitamins at home as well.

Having been having a prolonged gout attack that lasted an unprecedented two months (!!!) I was not optimistic about your thoughts on gout. But the price was right for the remedy and to my great delight I slowly began to recover so that upon returning home, my right foot was almost back to normal. So I postulated that you had helped but perhaps getting off other medications had contributed as well.

So I reintroduced the multi-vitamins yesterday and had an attack on my left foot by nightfall. I have cancelled my return to multi-vitamins and taken a second course of the Gout Killer remedy. I await this outcome knowing that whatever ails is likely to take days rather than hours to conquer.

It’s clear that the medical establishment is immune to resolving this age old condition. And it is the ultimate irony that colchicine has been licensed to a new owner (the first since 1790) and the price is now about $5 per pill. I have used this therapy successfully in the past but it was of no help in this latest marathon attack.

Sp thanks for your contribution to my alternative universe. I will continue to pursue your thoughts and if this latest round of Gout Killer puts me on a path to ending the immediate attack I’ll be back to purchase the more strategic follow up package as I will have been converted.

Until every other method has been exhausted, it is unwise to take a drug that interferes with genetic reproduction on the cellular level, and that has a narrow therapeutic index with high chances of side painful effects. Until every avenue of behavior modification has been examined (like weight loss, diet change, hydration and pH modification) and every other pharmaceutical that does not alter genetic makeup fails . . . the risks of colchicine may outweigh the benefits.

Because some people are extremely thick-headed and lazy, they will not attempt to manage gout attacks with conservative approaches.  In my opinion, colchicine is for those people only!  My advice is to explore every other avenue first, saving colchicine to be used as a last resort.  And if you do decide to try colchicine for gout, it is in your best interest to discuss everything we’ve talked about here at length with your medical professional.

Colchicine: Its Mechanism of Action and Efficacy in Crystal-Induced Inflammation.
https://www.ncbi.nlm.nih.gov/pubmed/18638431

Colchicine Suppresses Neutrophil Superoxide Production in a Murine Model of Gouty Arthritis: a Rational for Use of Low-Dose Colchicine.
https://www.ncbi.nlm.nih.gov/pubmed/18264123