What ARE Gouty Tophi? 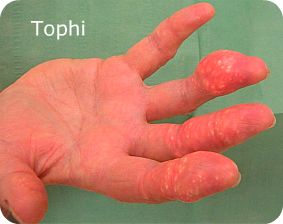 To correctly explain tophi, it is important to clarify that “tophi” is plural; “tophus” is singular. Tophi are deposits of urate crystals underneath the skin that grow due to excessive levels of uric acid in the bloodstream.

Typically, a tophus with grow larger and larger without intervention and will be accompanied by frequent and severe symptoms of gout.

The unsightly appearance of tophi is completely alarming. The true problem is that it goes unnoticed for an extended period of time before it is usually detected. It grows very slowly until it starts to become obvious, and can then grow to be quite large and grotesque.

Some gout tophi pictures are so shocking that they can be difficult to look at. The urate crystals take on a white-ish or yellowish color and appear to have the consistency of cottage cheese. Sometimes they can look like a mound of chalk under the skin.

Tophaceous gout is not known for causing pain due to the lumps or nodules themselves. However, if the elimination or excretion of excess urate is finding a place to accumulate so visibly, the symptoms of gout have moved to a chronic stage. The uncontrollable rate at which the attacks are most likely occurring makes finding adequate gout relief difficult at best.

What are the Associated Health Risks?

They true risk of tophaceous gout is that if the urate is accumulating in areas that are externally visible, the kidneys are in serious danger of massive kidney stones. Kidney stones can develop from a number of different substances produced by metabolic processes within the body, but uric acid or monosodium urate crystals are very common for creating kidney stones.

Holistic gout remedies are very effective at alleviating painful symptoms and for long-term prevention, but when gout has been severely ignored or mismanaged, pharmaceutical treatment and intervention is in order to establish adequate gout relief.

The other serious concern in regards to tophi gout is the danger that comes from the nodules becoming abscessed and infected. The incidence of the tophaceous lumps erupting is rare, but the threat of infectious poisoning like MRSA is possible.

In the New Zealand Medical Journal, it is stated that with years of stringent use of the most common pharmaceutical for gout, allopurinol, tophi may eventually disappear. The complications of surgery to remove tophaceous nodules can outweigh the advantages so the procedures are avoided as much as possible.

First I want to thank you for all the good information.  You really opened my eyes, it all makes sense now.

I have started drinking a lot of mineral water which I never used to.  Could you guide me to which small ionzer I could buy in London as I am finding it hard to get one.  Secondly, I can’t get a very good night sleep as I do shift work.  I have tried Horlicks but it doesn’t seem to work.  I’ve tried your breathing techniques.   Also I have joined a gym to exercise.  Although is now better, I still have little pain in my right toe.  How do I get rid of this pain?  On your suggestion I am taking an ibuprofen 200mg tablet.  Look forward to hearing from you soon.

What Joints are Affected the Most? 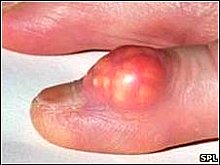 Gouty tophi are most common, in and around the finger joints. Although, finger tophi are typical, tophi can grow out of control on the toes, knees, elbows and even on the edges of the ears quite easily.

Often but not always, the nodules will grow in areas of the fingers or toes that are not disruptive to daily activity. In other instances the nodules are directly exposed and can be cumbersome and can become worn or split open. As was said earlier, when the lumps are opened, the possibility of infection is serious.

What Can Be Done About Tophi? 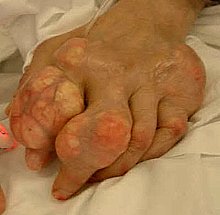 Because gout in general has become a mainstream degenerative disease subject to a great deal of discussion in the media, tophi is also starting to gain a lot of attention as well.

Historically, pharmaceutical medications for gout have only been used to treat symptoms and not the growth of tophi. This could possibly be changing.

Because the prevalence of tophaceous gout is growing steadily with the incidence of gout in general, developing new drugs to deal with it is extremely attractive to the pharmaceutical industry at large.

In the past, the way of dealing with tophi is to surgically remove them. This has a high rate of success but their re-growth is often reported. This is especially true if no additional treatments or gout remedies are strongly implemented to curb the excess of uric acid in the blood.

Remember!  Gout is a painful disease that is best prevented with proactive habits of good health. Gout never needs to escalate to the degree that unsightly lumps of tophi become visible.